How Well Controlled is Social Media on Higher Education Websites?

Our last post highlighted that most higher education websites can benefit from following Facebook and Twitter’s content sharing recommendations: implementing their tagging schemes results in content sharing that is more consistent with institutional goals for brand, quality and market positioning.

In this post we extend our analysis.  We examine the social media networks in use, the proliferation of accounts encountered on some sites and the attendant risks, as well as the associated issue of ‘stale’ content residing on out-of-favour networks.

Which Networks Are in Use?

Higher education organisations have embraced social as a powerful and relevant medium through which to reach their diverse audiences.  This recognition has led to experimentation with new and emerging networks followed by enthusiastic participation in those that seem effective in meeting institutional communications, marketing and branding goals. 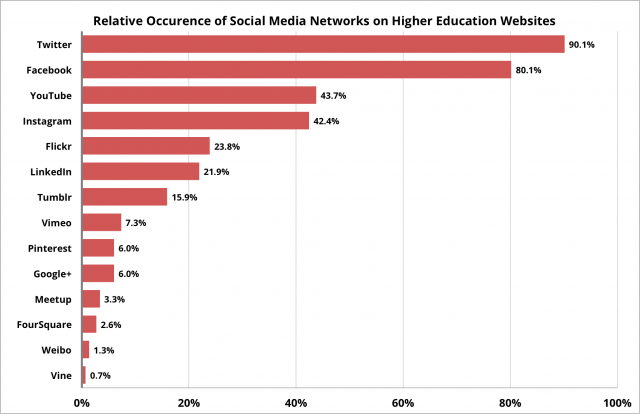 Graph 1: Proportion of higher education websites with at least one account present for a social network

We can also see from the links to social networks encountered on higher education websites that institutions take two approaches to using networks and to exercising control over the number of ‘voices’ creating content.

Most organisations have a set of ‘official’ accounts and control the output accordingly, but others have large numbers of active accounts linked to their sites. These links reference a mix of internal and external accounts: the latter, and the associated content, being beyond institutional control.  We reviewed one site with links to 70 Facebook accounts in addition to the official university account.  Another site had 135 links to internal and external Twitter accounts in addition to the university’s official Twitter feed.

As evidenced by our research, we can see that it might be easy to have a false sense of security about how many social media accounts are associated with an institution.  For most sites ‘following icon’ links are placed in the home page footer to connect to official accounts. And, these might seem to constitute the only social media links on a site.

However, in practice we can find links to other departmental, sports team or social group accounts scattered across pages deeper in a site.  Furthermore, many sites have links to accounts operated by other universities or other organisations on their web pages.  In addition, albeit for a relatively small number of sites, we also find links to companies, organisations and individuals on LinkedIn. It seems prudent to know these links exist and that they are to entities with which the organisation would wish to be associated.

A site social media audit seems prudent to catalogue the accounts, identify which of these are ‘under the control’ of the institution and which of these are external.  And, for the latter, a suitability review seems a reasonable reputational precaution.

Given that initial use of a social network is experimental (Snapchat, anyone?) and that sometimes the results will be disappointing, networks will fall into disuse and eventually be abandoned.

However, because social content lies outside an institution’s content management system (if one is in use), the attendant ‘clean-up’ exercise doesn’t necessarily take place. This is most evident with Flickr. We encountered many links from higher education websites to Flickr accounts in which content hasn’t been updated in years: content that detracts and distracts from the branding efforts present on a main website.

The plethora of multiple social accounts on websites means that it also makes sense to see which networks might have the highest redundancy or content decay. About 45% of all links to social accounts are to Twitter; roughly 30% to Facebook accounts and other networks represent less than 10%. Limited sampling of links suggest that the problem of ‘stale’ content or links to inactive or dormant accounts seems largest with Flickr and LinkedIn: lots of open accounts, but little activity. 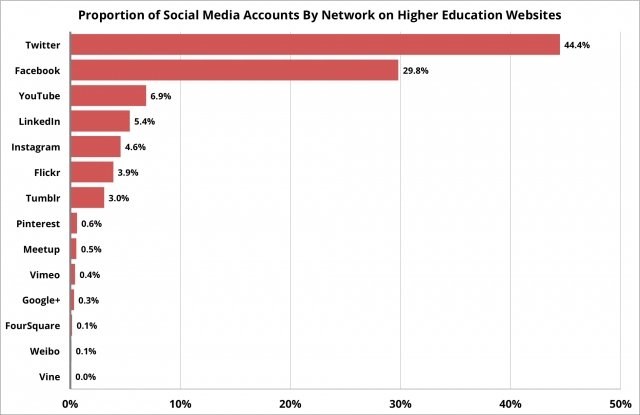 When organisations are no longer active on networks, it makes sense to acknowledge completion of the experiment, close the account and present a more ‘professional’ image to the world.

As Twitter is the most important network by number of accounts, in our next post we look at some of the statistics around followers, friends and activity levels for higher education accounts and establish some activity benchmarks.