What 2,575 US University Websites Told Us About Content Management Systems 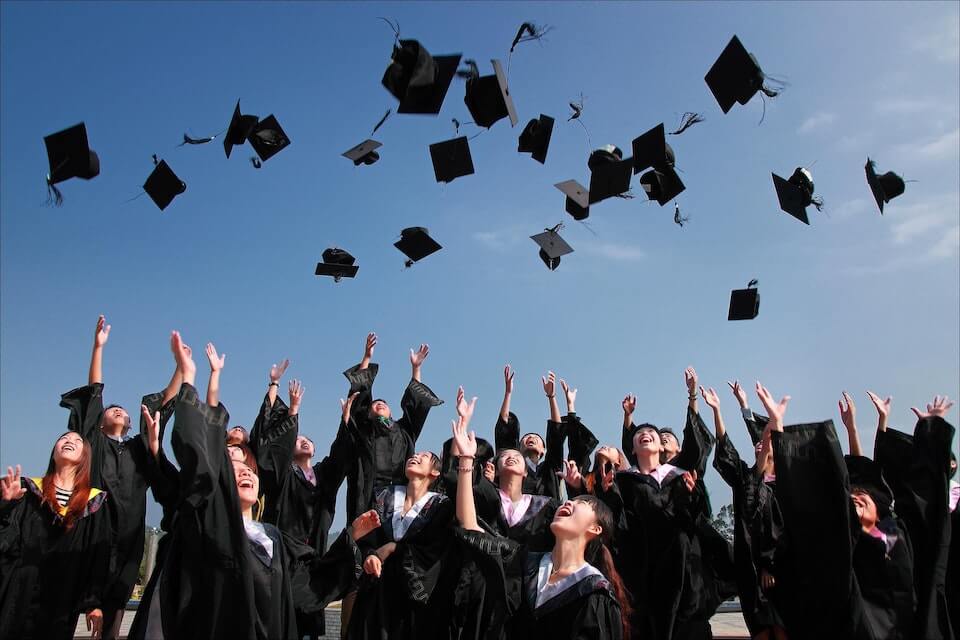 In September 2016 we published a blog post about the web content management systems US colleges and universities use. We sampled 135 top-ranked US institutions and received polite feedback that our survey was unrepresentative of the US higher education system. We agree. And we believe this post goes a long way to addressing that objection.

We extracted a list of 4,683 records from the IPEDS database corresponding to entities awarding associates through to graduate degrees along with the associated home page URLs. We ran a script to test the URLs, eliminating institutions no longer offering courses, updating those entities that have upgraded from http to https and verifying the current URL to which the URL in IPEDS actually resolves.

Based on our list of “clean” URLs we used scripts to perform two levels of testing. One script examined the content and structure of the source code to identify the web content management systems in use. A second script tested for the presence of commonly-used “administrator” sign-on pages for various CMSs. At the end of two rounds of testing we identified 55% of the original records or 2,575 different colleges and universities. We could use the ‘investigative’ techniques described in our September 2016 post to identify further CMSs – but time precluded this approach.

The following charts summarise the composition of the results group using IPEDS terminology and, for the sake of clarity, we’ve reproduced the IPEDS definitions.

Level of Institution: A classification of whether an institution's programs are 4-year or higher (4 year), 2-but-less-than 4-year (2 year), or less than 2-year. Note: we excluded less than 2-year programmes.

Institutional Category: This indicator is derived using the level of offerings reported on the Institutional Characteristics (IC) component and the number and level of awards reported on the Completions (C) component. We used four categories - associates and certificates, not primarily baccalaureate or above, primarily baccalaureate or above and graduate with no undergraduate degrees.

To provide context for the set of universities and colleges identified in our exercise, we've summarised the distribution of the institutions in each of the above categories in the following composite charts: 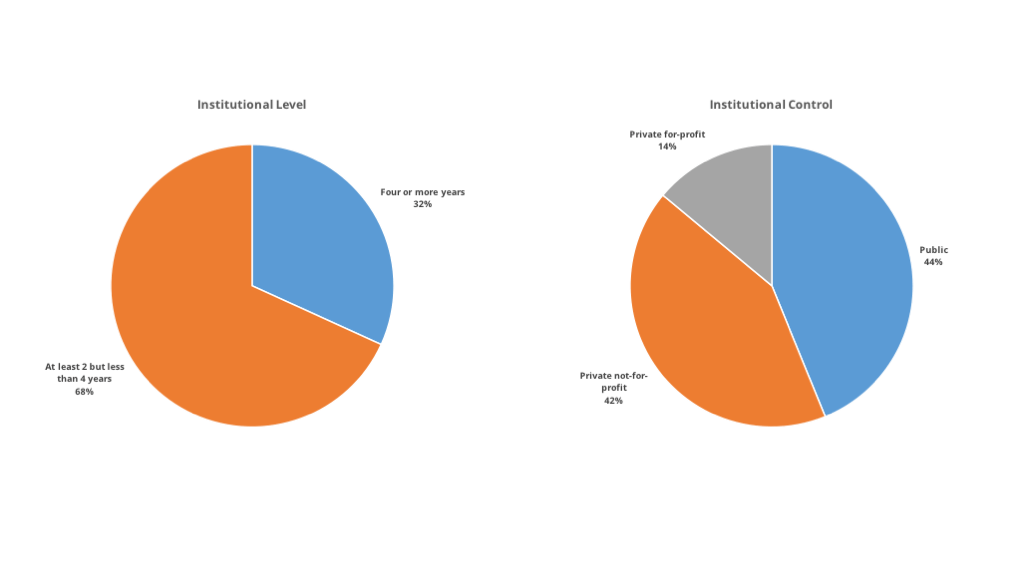 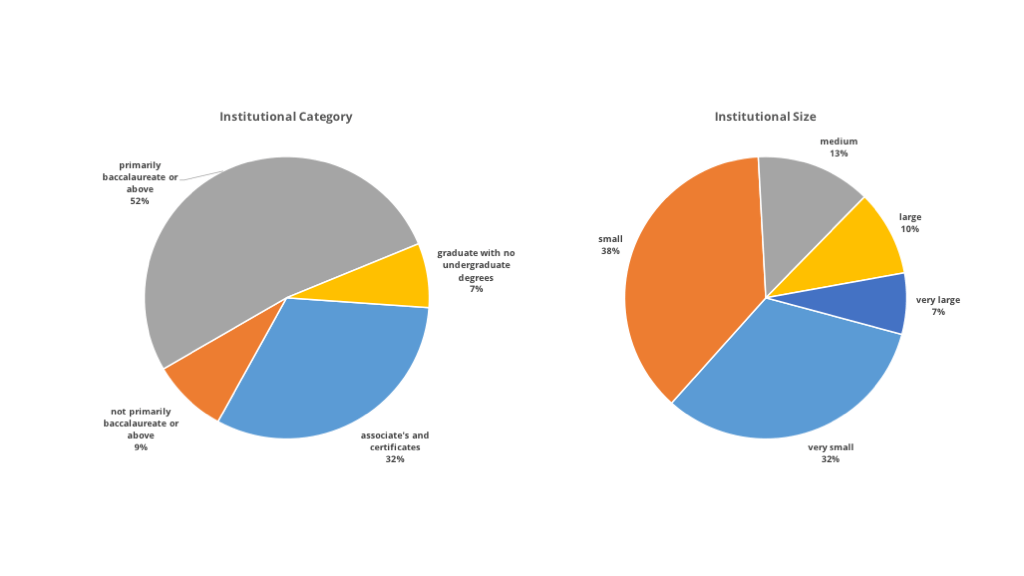 One-third of the institutions in our dataset fall into the category of offering four or more year degree courses, they split roughly 60:40 private to public and approximately half are primarily undergraduate or above institutions.

We identified 55 different web content management systems in use from 53 suppliers (Adobe and Microsoft showed up with two product offerings). There are likely further suppliers, and in-house developed CMSs, among the 45% of sites that did not readily reveal their CMS and the many ‘sub-sites’ reached via the main institutional home pages.

Sixteen CMS suppliers support 95% of the sites identified in this study, with WordPress and Drupal being the two dominant web content management systems.

WordPress and Drupal, both open source CMSs, predominate among both two-year and four-year higher education institutions, suggesting that functionality rather than cost is an important factor in deciding which CMS will best support an institution's online objectives. It is likely that four-year institutions have greater financial resources than two-year institutions, but it is hard to see an overall clear difference in the adoption of proprietary solutions rather than open source, based on the data we accumulated. 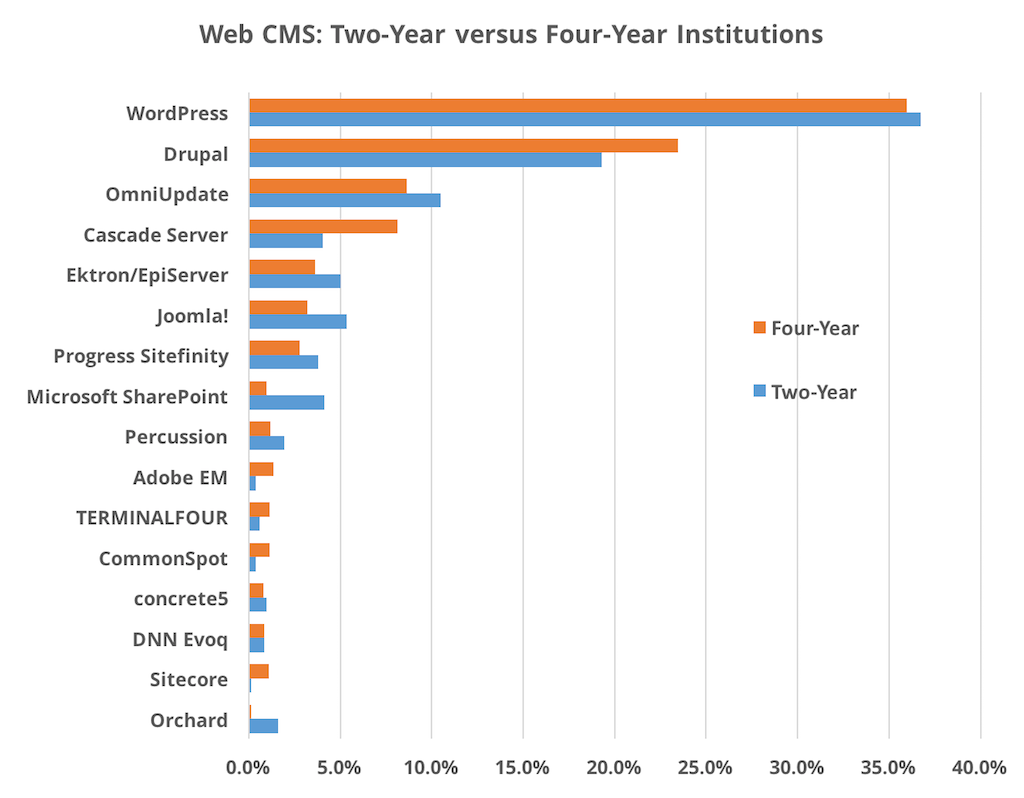 In looking at system adoption by publicly-funded and private institutions we again see WordPress and Drupal holding the majority of market share within institutions in our sample group. However, publicly-funded higher education institutions have also readily adopted solutions from OmniUpdate and Hannon Hill (Cascade Server) and a number of other proprietary solution providers. 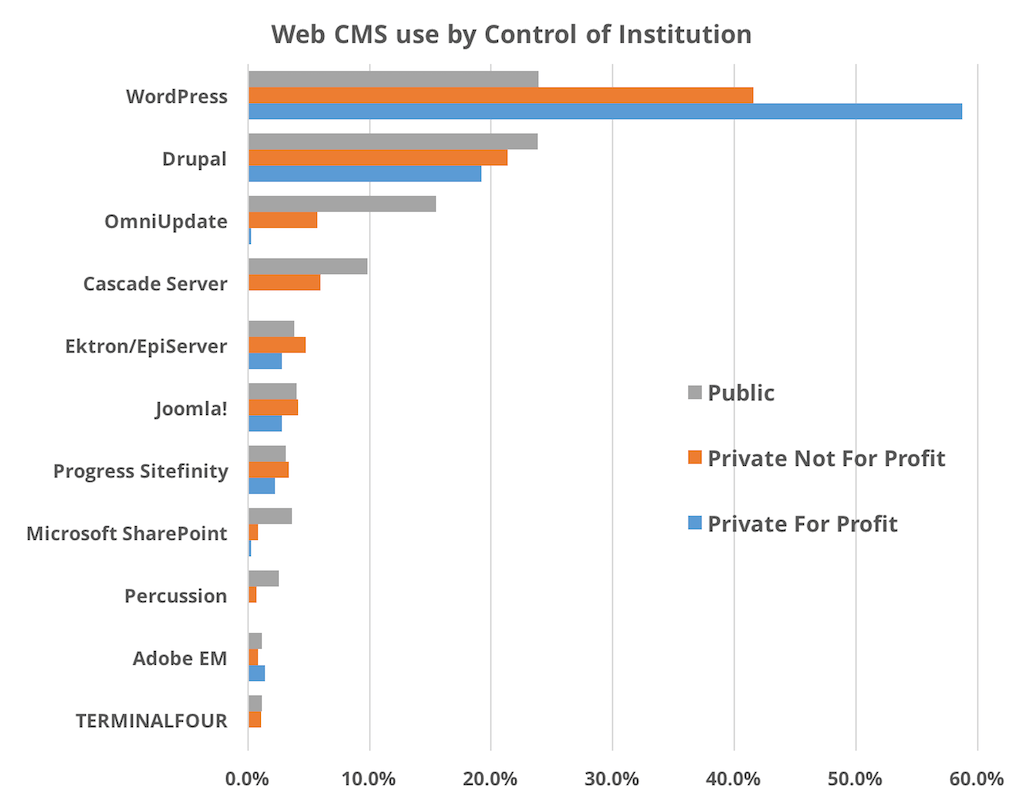 The scope of programme offerings (institutional category) mirrors the results of the analysis of CMS adoption by funding source. Comprehensive undergraduate/graduate institutions favour solutions from WordPress, Drupal, OmniUpdate and Hannon Hill (Cascade Server) along with a handful of other suppliers with 1% to 5% market shares. 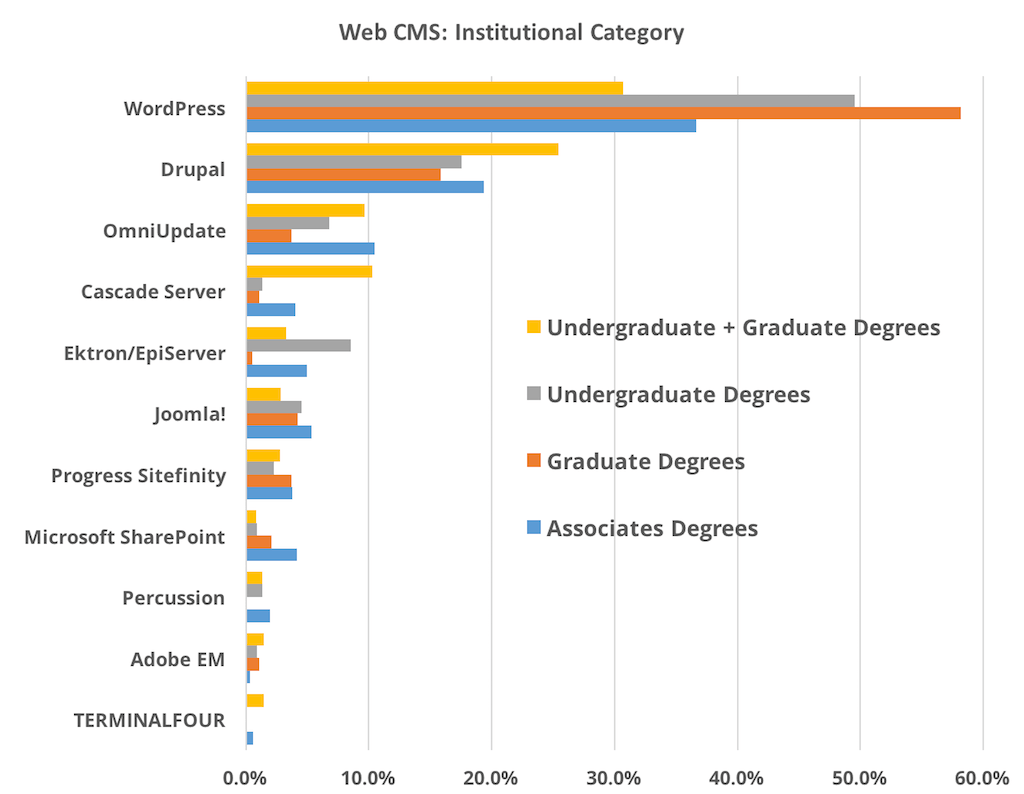 A marked distinction finally shows up when the CMSs in use are analysed by size of institution. Very large higher education institutions (more than 20,000 students) favour Drupal, OmniUpdate, Cascade Server and Adobe Experience Manager. We hypothesise that these solutions are deemed more capable of supporting the range of needs of larger institutions, recognising that even large universities have online presences comprising large numbers of smaller sites rather than monolithic central websites.

At the other end of the scale (sub 1,000 students) open source solutions, principally WordPress, Drupal and Joomla!, appear to provide sufficient functionality to support the online objectives of these institutions. 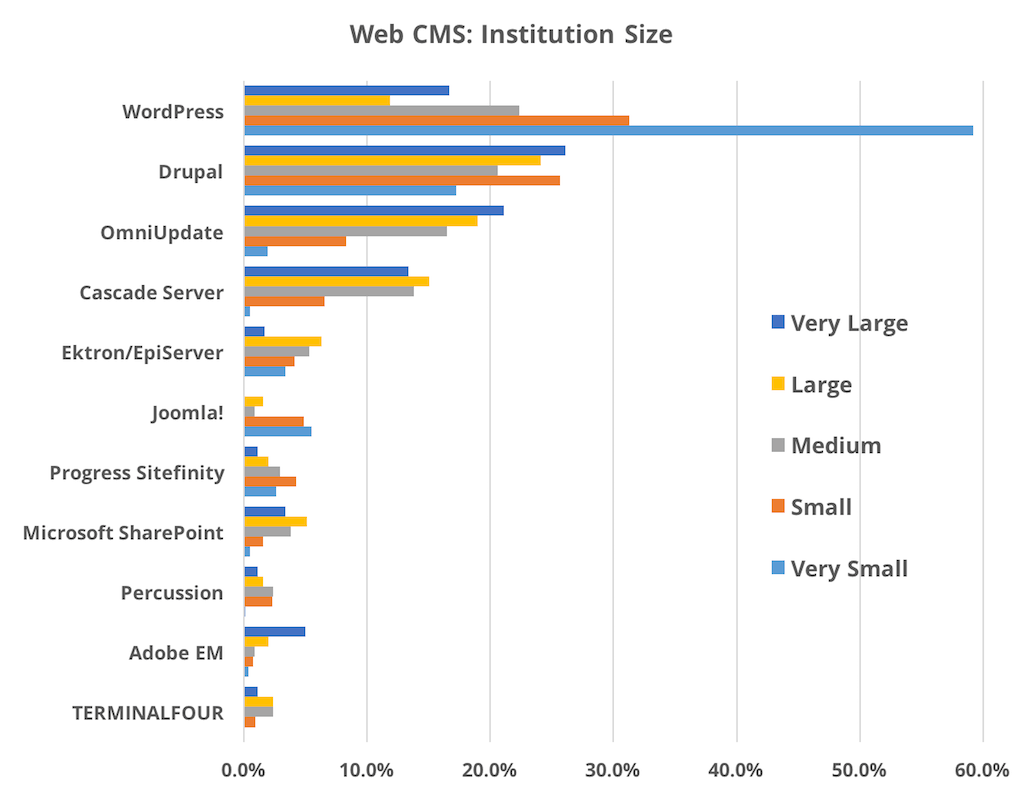 We’d like feedback here or by email on the following: